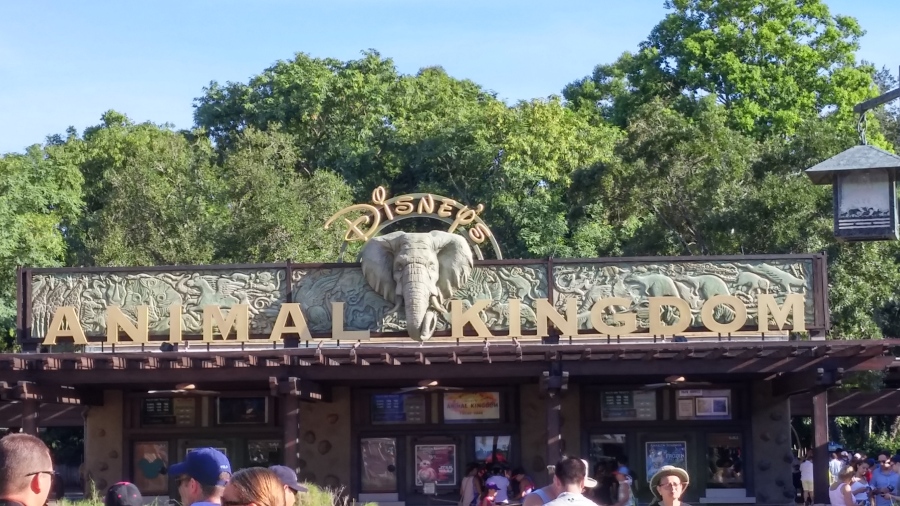 Following our day off, our next stop was Animal Kingdom.  Before leaving for the park, I finally got to try something that I’d heard about.  We were staying at Pop Century, as we always do, and there was a new addition to the menu… The Pop Tart Breakfast Sandwich.  This item had apparently been available in the past when people requested it, but never on their published menu.  But that had changed.  What more could one ask for in a breakfast?  Eggs, bacon and cheese sandwiched between two strawberry Pop Tarts.  While I wouldn’t eat this daily, it did make for a fun experience.  Plus, it gives me a great story to tell people.

Upon arriving at Animal Kingdom, we always make a bee-line for Expedition Everest.  Since this is the only coaster at the park, it tends to get a bit busy as the day progresses.  But if you make your way there first, you can usually get a ride or two (sometimes three!) with little or no wait.  That’s exactly what happened.  We got a walk-on for two rides in a row with no wait time.  We could have gone again, but it was time for our first FastPass of the day on the Kilimanjaro Safari.  We hadn’t done the safari in a couple of visits.  It was nice to get out and see all of the animals.  Lots of giraffes, elephants, a couple of lions and the like.

For lunch, we made our first visit to the Flame Tree BBQ.  The meal was quite good and the seating entertaining as there were large birds wandering around as it is an outdoor seating venue.  There was another family sitting near us with two children who were scared shitless by the birds.  It was hilarious.  The girl was sure that they were following her around.  For our dinner that night, another first for us, supper at Rainforest Café.  Now this was quite a bit of fun.  The menu is nicely varied with a very particular ambiance of being in a rain forest.  For dessert, we ordered their famous Sparkling Volcano.  This can easily feed 3 people, so we shared one.   A pile of brownies, served warm with vanilla ice cream, chocolate and caramel sauces and whipped cream.  Oh, and with candles and streamers to boot.  Anytime one is delivered, the wait staff scream out “VOLCANO!” as they exit the kitchen. I’d definitely check this place out again. 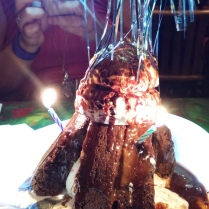 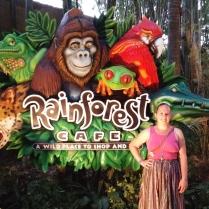 Later that night, we witnessed the Tree of Life awakening.  Using laser projections and lights, the animals carved into the tree of life come alive and move around.  It was truly mesmerizing.  To cap off the night we attended a viewing of Jungle Book: Alive with Magic.  It was a good show, but the quality of the water projections didn’t compare with World of Colour in Disneyland.  This was a limited run show that has now ended.  Still happy that we got to see it.

One interesting tidbit from our day at Animal Kingdom was that we came across a filming of the TV series Blackish while there.  We had crossed paths with the crew a few times over the week, but this time we actually saw them all set up.  We saw some of the cast as they were prepping to film their scene at one of the restaurants.  It was fun to watch the episode a few weeks later, knowing that we had been right there.