One thing we do on every visit to Disney World is to schedule an “off day” mid-visit.  This allows us to rest up a bit and just relax since the other days are what you could call loaded.  We typically leave the hotel around 8AM and often return around/after midnight.  So we need a little downtime to recharge and get ready for the second half.

For our day off, we always have a Disney Springs day to get our shopping and dining on.  Disney Springs is a charming, waterside resort area loaded with shops, restaurants and nightclubs.  There is definitely a little something for everyone here.  Since it was our day off, we slept in a bit and casually made our way to Disney Springs for breakfast.  We basically had a private bus to take us there as only the restaurants were open at the time.  The shops only opened around 10AM and we had left around 9.  Since our last visit 4 years prior, there were extensive renovations done to the area formerly known as Downtown Disney.  It has a very chic feel to it now and reminded me of The Grove in Los Angeles in its feel and vibe.

We immediately made our way to one of our favourite haunts – Wolfgang Puck Express.  This is by far the best value for  your money if you’re on the Disney Dining Plan.  WPE counts as a Quick Service meal, but feels like a Table Service restaurant.  While you place your order at a fast food style counter, they deliver the food to your table, have waiters who come by to check on you, refill drinks, etc., and you get to use actual cutlery!  Plus, the food is to die for.  As per the usual, I opted for the Corn Flake Crusted French Toast for breakfast.   Damn it is good….

Following our meal, Isabelle and I wandered around the rest of Disney Springs for a while.  Today was going to be a bakery and dessert visit day for Isabelle.  She considered it her research.  There are a few bakeries on site, so we visited those to peruse the display cases, taking some photos, sampling some wares…  Isabelle was in heaven!  There were so many things we wanted to try, but just couldn’t bring ourselves to purchase everything.  One spot that we did stop to eat at was called Sprinkles.  After looking over our options, I chose to sample the S’mores Cupcake.  Isabelle, still feeling full from our previous snacking, went for a frosting shot.  Yes, that’s right.  They serve up a shot of one of their various frostings in a little cup.  She opted for the lavender frosting shot.

Another first for us on this leg of the trip was making a custom-made item at Goofy’s Candy Company.  You begin by choosing your base – caramel apple, gingerbread man, Mickey Krispy treat or marshmallow; then you select white/milk/dark chocolate dip; followed by toppings (sprinkles, chocolate chips, M&M’s, nuts, etc.); and lastly a drizzle of chocolate (again, either white/milk/dark).  Once you make your selection on your individual order form, you turn it in and they create it in front of you.  Isabelle opted for sprinkle-coated, chocolate-dipped marshmallows.  My creation was a dark chocolate covered Mickey gingerbread man, covered with Butterfinger crumbs and then drizzled with milk chocolate.  If I hadn’t been diabetic before this, I would be now! 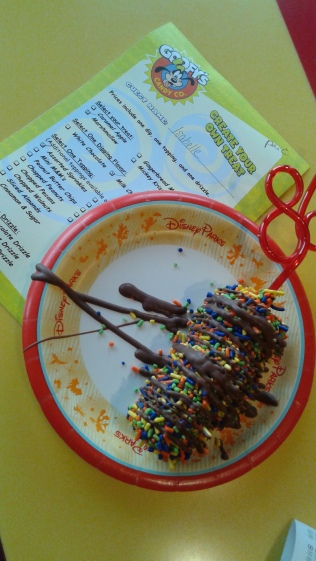 For dinner, we returned for a second meal that day at Wolfgang Puck Express.  I had the bacon-wrapped meatloaf along with cheesecake for dessert.  I’ll talk about these in another post someday, but the cheesecake is by far the creamiest, most delicious I’ve ever had.  I get this every single time we eat dinner at WPE.

After dinner, we returned to the Magic Kingdom for another go on Seven Dwarfs Mine Train, and to take in the Wishes Nighttime Spectacular. Since we had some time to spare, we decided to pick up some popcorn and a bottle of water and then planned on heading over to find a location from which to watch the fireworks.  When we got to the popcorn stand near the hub in front of Cinderella’s Castle, the cast member working noticed our “Happy Anniversary” buttons.  She handed me the popcorn, and put down the bottle saying “Happy Anniversary!”  Isabelle looked at her and said “so how much?”  The cast member again smiled, said “Happy Anniversary!” and slid the water bottle closer to Isabelle.  My poor tired and somewhat confused wife was still standing there with her wallet in her hand, at which point I reached in, grabbed the items and said “Thank you!  We really appreciate it.”  She gave us both items for free.  While it’s a small token, it is just another example of that Disney Magic.  And it made us both feel really good.  Good job Cast Member!