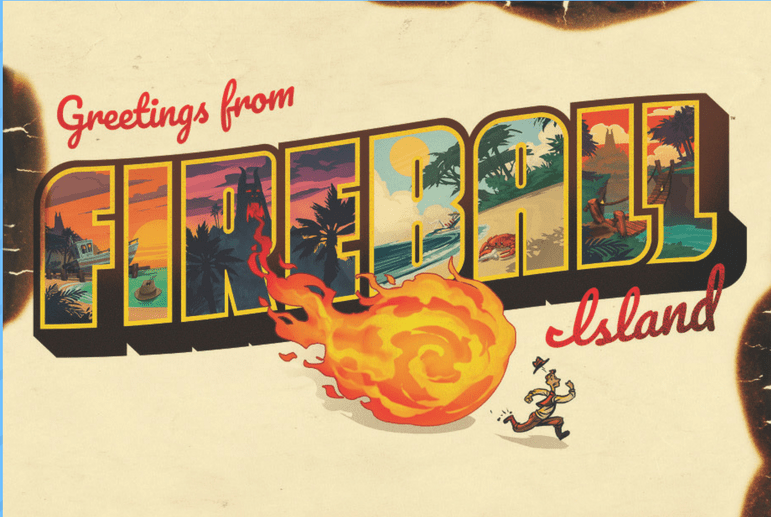 One of my fondest childhood memories is of the countless hours that my brother and I spent playing Fireball Island.  In the late 80’s, Milton Bradley had released a revolutionary (to me at least) board game.  No longer was there a flat two-dimensional board on which to play, but here was a three-dimensional island board, with rivers, bridges and caves.  At the centre of the island was the primitive idol Vul-Kar.  The objective of the game was to reach the idol at the top of the mountain, steal the jewel and escape the island.

Apart from the other explorers trying to steal the jewel from you, the danger came in the form of fireballs, launched by Vul-Kar.  These fireballs (red marbles) would careen down the gullies, crevices and rivers on the island, knocking down any wayward explorers, setting them back in their quest.

One of the biggest regrets I have is selling this game at a yard sale, along with HeroQuest and Clue: The Great Museum Caper.  I managed to find a copy of Museum Caper at a second hand store a few years back, but Hero Quest and Fireball Island are rare items to be found.  Fireball Island can currently be found on eBay at prices ranging from $150-400.

While I’m sure the game wasn’t AS much fun as I recall it to be, it remains a very fond memory from my childhood.  What excites me immensely is that the gang at Restoration Games is in the process of attempting to relaunch the game.  They have launched a Kickstarter campaign to fund this initiative, including the addition of expansion packs.  I am beyond thrilled to see this game potentially return to the world.  If you were a fan of the original game, or just a fan of games in general, I strongly urge you to jump in and help fund this Kickstarter campaign.  Let’s raise Fireball Island from the seas of forgotten memories and bring it into the 21st century!

Have any of you played Fireball Island?  What are your memories of the game?   Do you have any other games that you miss?