What makes a person a leader?  This is something that I’ve struggled with for many years.  The easiest definition I could find was the following:

Seems simple enough, but what truly makes a person a leader?  Is it their knowledge?  Their charisma?  Their talent?  There doesn’t appear to be a single all-encompassing answer to that question.  Some leaders have a little from column A and a little from column B; others are purely column A or column B.  And still the rare mavericks have something from another page altogether.

In my current capacity, I am a leader – at least by title.  Do I feel that I am truly leading my team?  By times yes, by times no.  Sometimes I feel like a glorified shift supervisor just plodding along with the current, doing what my manager directs.  At other times, I feel like I’m the CEO and everything hinges upon my decisions and leadership talents.  All of this is due to the simple fact that I’m not sure that I want to be a leader.  I am a reluctant leader.

What is a reluctant leader?  Someone who doesn’t really want to lead, but is either thrust into the position, or who shows some of the traits that one would expect from a leader and gives it a go to see what they can make of themselves.  I fall a bit into both categories.

When God called upon Moses to lead the Israelites out of Egypt, he tried to turn down the job.  He claimed that he was not worthy of the role, of the mantle that was being thrust upon him.  He questioned why people would follow him.  But he did, in the end, take on the leadership role and freed his people.

I somehow continue to rise through the ranks and end up in a leadership role.  In nearly every job that I’ve worked since I was 18, I have ended up in some form of leadership.

The first example of this was working at Ambassador Video.  While never officially moving into a leadership role I would often become the unofficial supervisor on duty.  We were open 24/7/365 and I would cover the overnight shifts while Paul, our night shift supervisor, on was vacation, leaving me alone to manage the store.  Daytime would often find the on-duty supervisor leaving me alone to manage everything while they either did some paperwork and the like in the back office, or ran out for lunch/errands.  Towards the end, I was even assigned some supervisor shifts to cover gaps in the schedule, while never actually being made a supervisor.

After the video store closed, I eventually found my way to Chapters.  Being hired on seasonally for Christmas, I quickly became a permanent hire.  I eventually took over the French department and became the “lead” for this section of the store.  My general manager approached me when there was a vacancy on the leadership team, but I had no interest in moving into the role.  I liked my little world and was quite content. Time passed and someone else was hired.  Then another vacancy appeared.  Again, the recruitment drive was in full-force to bring me up to the leader role, but I held out.  As a means of getting his way, the GM created a new manager’s position.  He filled the vacancy that was existing, but created a new role as manager for the French department.  I’d still keep my fiefdom, but would officially join the ranks of the store’s leadership. 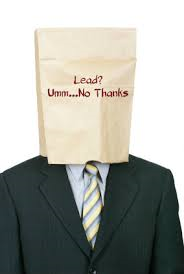 I was quite reluctant. (I know…the blog title might have given it away)  I had not had any ambition to move into a leadership role.  I was also beginning to get frustrated in my job and had considered moving elsewhere.  Because of this, I decided, “why not try?  If you don’t like it, you’re thinking of quitting anyway.”  For the next three years, I served as a member of the Chapters Moncton leadership team.

After a 5-year stint working at Chapters, I had come to the end of my rope.  The novelty of the leadership role had long worn off.  I had been quite unhappy towards the end, largely due to the (very) bad leadership that was surrounding me in the store.  I was burned out and sick and tired of being a leader.  So I left and moved to my current employer.

Much like with Chapters 5 years before, I was hired on seasonally as a contact centre representative for the peak season.  Within 2 months, I had signed on as a permanent, full-time employee.  After a few years and a few changes of roles, I was offered a position as a Team Leader for the Claims team, in a developmental role.  It would only be temporary as the current TL had moved to a new team and they needed to fill the gap until they decided how they wanted to proceed.  Since I had previously been a  claims analyst and was currently the lead trainer for claims (another lead position that I hadn’t wanted, but inherited), they thought I could fill in.  This 2-month period turned into an 18-month stint, ending when I moved into another permanent Team Leader position in the company.

I had fought against being a leader.  I had even left Chapters because I did not want to be a leader anymore.   But here I was again…a leader.

I have now been a Team Leader over two different teams, spanning the majority of the past 5 years of my life.  My current team continues to grow and become more diversified, yet we succeed at all turns.  We are one of the most engaged teams in the company, based on one of our most recent corporate engagement surveys.  But still I question my abilities and desires.

There is obviously something in the leadership role that attracts me.  I do not actively want to be leading.  I do not want to have the responsibilities and accountability that goes along with the role.  Over the years, I have come to recognize that I do possess many of the inherent qualities of a leader.  I continue to excel and succeed in my various leadership roles, but that nagging voice continues to rear it’s head.

Although there are days when I enjoy the role, there have been many others in recent weeks where I have not.  I have struggled with remaining in this role.  But why do I want to leave?  Am I just afraid of the responsibility?  Or do I want to leave for the right reasons.  Reiki principles tell me that if I am facing a challenging situation and simply run away from it, the same scenario will continue to present itself to me until I can resolve it. Maybe it’s time for me to learn to accept my role in life.

My name is Chris, and I am a (reluctant) leader.  At least for now….