Music has played a large part in my life.  Growing up, my father was a music lover, so we always had a wide variety of music in the house, whether it be records or cassettes.  My music collection started fairly young with “Weird Al” Yankovic.  This progressed into various other genres and types over the years, ranging from Hard Rock/Metal to Alternative, to Pop, to Swing, to Jazz, to Blues, etc.  I’ve pretty much gone through the entire roster, with the notable exceptions of Country and Rap.  And while I do have a faint appreciation for very small samplings of these two genres, they aren’t my favourites.

I started thinking about music again recently after having gone to see Vance Joy and Reuben & The Dark last week.  I’ll then be heading to Montreal in just over a week to see Black Sabbath.  This has had me stop and reflect on the concerts and artists that I have had the pleasure of seeing live.  None were more meaningful to me than Black Sabbath.

Black Sabbath was my first foray into the heavy music world.  Until my exposure to Ozzy and the Sabbath boys, I was an avowed Pop lover.  Granted, I was a young’un, still in school.  I was listening to Barenaked Ladies, Hootie & The Blowfish, NKOTB, Roxette, Ace of Base and the like.  I have no shame in that.  I truly liked that music at the time.  In truth, I still like that music.  (You can ask my wife if she’s ever heard me randomly break into a chorus of The Sign by Ace of Base.)

Black Sabbath was a revelation to me.  It opened my ears, and my mind, to a wider array of music.  Of course, I was jumping on the bandwagon of a band that had disbanded in 1979.  Never did I expect that I would be able to experience them live.  (side note: a version of Black Sabbath did carry on through the 1990’s, but this was not Black Sabbath in my mind.  It was another group with 1-2 of the original members of the band…)  Then, something happened that would mark me forever.

I was walking through the mall one afternoon when I passed Sam The Record Man (anyone remember Sam’s?) and noticed a handwritten sign in the window:

The first thing that shook me was that Sabbath was reuniting, and they were going to Montreal.  That was only a 12-hour drive (at the time).  But the kicker was the date.  The concert was going to be held on August 22 – my birthday.  I HAD TO GO! 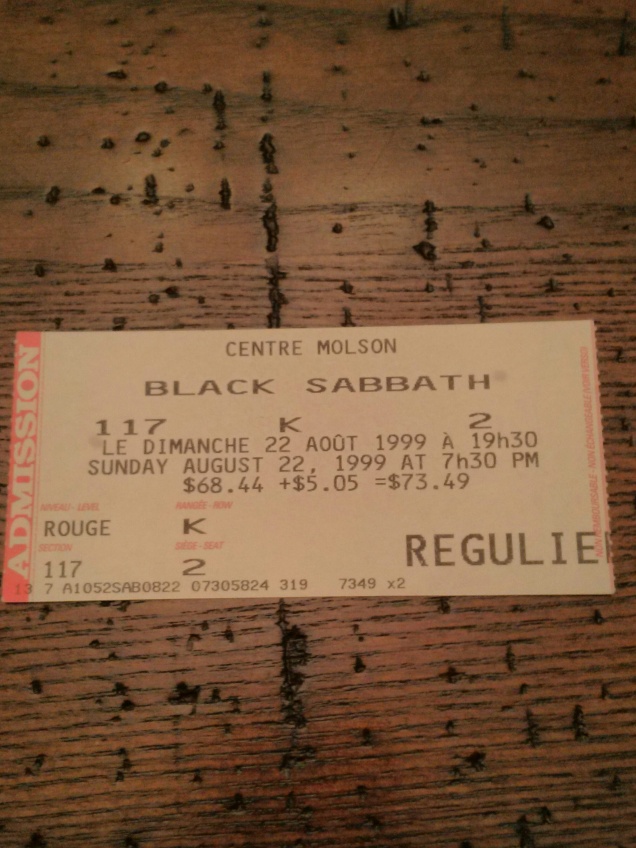 I can still remember that day vividly.  My brother and I both went to the show.  We had been expecting two opening acts, as that is what had happened on all the other tour dates.  The first opening act was Drain STH.  The crew did the set change, but I didn’t think anything of it at the time.  The lights went off and rather than have another opener come out, there was Black Sabbath.  The first chords of War Pigs rang and the lights came back on.  I had such an emotional reaction.  Tears streamed down my face.  Never again would I poke fun at those videos of girls losing their shit when The Beatles or Elvis were performing.  I understood.  Ozzy was sick as a dog, his voice cracking, but it sounded heavenly to me.

Now, some 17 years later, I will be book-ending things.  In 1999, my brother and I were there for the Reunion Tour.  Now, we will get to see them one last time as they complete their new tour The End.

Every time I venture out to see a live concert, I always leave with the same thought – I need to do this more often.  This year is starting off well.  I’ve already seen 1 concert with a second on the way this month.  I’ve also just purchased tickets to see City and Colour later this summer at Casino NB.  I’m going to consciously try to see more shows going forward.

To steal a line from Jay and Silent Bob Strike Back: “And on that note, we cue the music.”

My collection of concert tickets

One thought on “Cue the Music”